The group » History of the group

2021 – Expansion of the operating activities through the acquisition of Frucon² NV, operating under the brand name Nayan.

2020 – Start-up of the additional production building at Vantegmen (Wetteren, Belgium).

2017 – Integration of the Dutch production activities in Belgium.

2016 – Strengthening of commercial position in Europe through the acquisition of Webprint in the Netherlands.

2014 – Phasing out and eventual cessation of the wholesale activity of the Filmobel NV entity.
Liquidation of smartphoto SAS with integration of the French customer database in the Belgian company smartphoto NV.

2010 – Closing of the lab in Tanumshede, Sweden – Centralisation and automation of the production operations in Wetteren, Belgium.

2008 – Completion of the restructuring of the Imaging Group, with the integration of the production activities of Extra Film (France) SA in Belgium.

2007 – The brand names ExtraFilm, Maxicolor and Wistiti were combined under the ExtraFilm name.
Centralisation of the two channels for photo shops, Filmobel (hardware) and Spector (photo service), under one organisation in Wetteren, Belgium.

2006 – Litto-Color, the lab in Ostend, was divested.
Sacap France was closed.

2004 – Acquisition of the business of KodaPost in Scandinavia, and of Litto-Color, a photofinishing lab in Belgium with commercial activities in the Benelux and France. Closing of the lab in Hungary.

2003 – Start of programme to expand ExtraFilm to become the Group’s brand name for ‘web-to-post’ activities in Europe.

2002 – Merger by absorption of Photo Hall by Spector Photo Group, followed by the start of a programme to remodel the Hungarian organisation to match the Belgian Photo Hall concept.

2001 – Withdrawal from the German and Austrian markets, and streamlining of the photofinishing division to five (5) labs in Belgium, Sweden, France, Hungary, and Italy.

1998 – Listing of Photo Hall, followed by the acquisition of Hifi International in Luxembourg.

1997 – Maxicolor expands activities into Belgium and the Netherlands.

1996 – Agreement with the Swiss Interdiscount holding company gave access to the Hungarian and German markets, and ensured 100% control of Extra Film Switzerland; also the acquisition of Photo Hall (Belgium) and followed by the acquisition of the French Maxicolor mail order company.

1995 – Expansion into Austria and acquisition of a majority interest in Extra Film Switzerland.

1994 – Acquisition of photofinishing labs in France.

1991 – The Group acquired a majority interest in Prominvest, a holding company listed on the Brussels stock exchange. Via a reverse takeover, the Group became part of Prominvest, which meant the Group indirectly obtained a stock-exchange listing.

1988 – Acquisition of Tecnocrome, a photofinishing organisation in Belgium.

1984 – Joint venture for mail-order activities in France under the name of Extra Film, a joint venture between DBM-Color and Extra Film from Sweden.

1982 – Expansion into the Netherlands.

1977 – Creation of the Spector™ brand name and link with the logo.

1965 – Start of the business activities of DBM-Color. 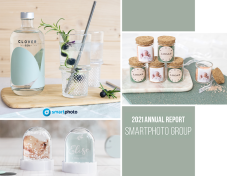